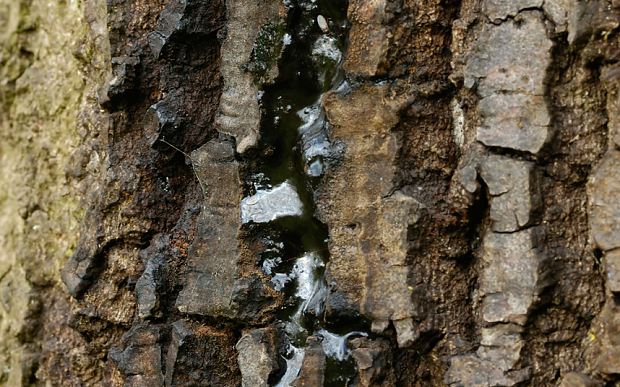 Acute oak decline (AOD) is a condition  affecting several thousand oak trees, mostly across East Anglia, the Midlands and Southern England as far west as Somerset. It affects both of Britain’s native oak species: pedunculate or ‘English’ oak (Quercus robur) and sessile oak (Quercus petraea) as well as other species of oak.

Symptoms
AOD is characterised visually by dark fluid oozing from cracks in the bark, rapid decline of the tree, and the eventual death of affected trees. Death can occur within four or five years of symptoms first becoming visible

Treatment
Our advice is to leave infected trees in place and continue to monitor them, unless there is an immediate safety concern. If possible, cordon the trees off to prevent access. Try to minimise any contact with bleeds, to reduce the possibility of transferring the disease from tree to tree. If only a limited number of trees appears to be infected on a site, and most are of the same oak species, it might be prudent to fell and destroy the infected individuals to keep infection levels low and reduce the risk of infecting healthy trees.

‘Chalara’, ash dieback or Chalara ash dieback, is a disease of ash trees caused by a fungus called Hymenoscyphus fraxineus. Chalara causes leaf loss, crown dieback and bark lesions in affected trees. Once a tree is infected the disease is usually fatal, either directly, or indirectly by weakening the tree to the point where it succumbs more readily to attacks by other pests or pathogens, especially Armillaria fungi, or honey fungus. However, some ash trees appear to be able to tolerate or resist infection, and scientists are studying the genetic factors which make this possible so that tolerant ash trees can be bred for the future.

Ash trees have many genetic variants and occur right across the UK, they come into leaf at different times. Ash is also one of the last tree species to flush, sometimes taking as long as six weeks to do so, and can often occur as late as the end of May. Trees in the colder north flush later than trees in the warmer south. Some ash trees will break-bud, or flush, earlier than others, and some buds will produce flowers rather than new shoots. Some variation will be more apparent in older trees.

Some shoots on ash trees will fail to flush altogether, while others will flush normally before showing signs of ill-health or dieback later. These events might mean that the trees are damaged in some way, but shoot death and dieback in ash trees can have a number of causes.

So if an ash tree does not have any leaves on it in April and May, it does not necessarily mean that it is diseased or dying, but by mid-June all healthy ash should be in full leaf.

Mid- to late summer (August and September) is a good time of year to undertake surveys, because once autumn has begun, visual symptoms can be confused with leaves that are naturally changing colour.

In the autumn you might see clumps of sometimes dark-coloured ash keys (seeds), retained on the trees after the leaves have fallen. This is quite normal, but from a distance they can be mistaken for the blackened leaves which can be a symptom of the disease.

Treatment
You are not required to take any particular action if you own infected ash trees, unless a plant health authority serves you with a statutory Plant Health Notice requiring action. Keep an eye on the trees’ safety as the disease progresses, and prune or fell them if they or their branches threaten to cause injury or damage. In low-density situations such as parks and gardens, you can help to slow the spread of the disease by removing and disposing of infected ash plants, and collecting up and burning (where permitted), burying or composting the fallen leaves. This breaks the fungus’s life cycle.

One of the first external symptoms of infection is bleeding lesions: patches of dying bark on the stem or branches that ooze drops of rusty-red, yellow-brown or almost black, gummy liquid. The bleeding may be at the base of the tree at the soil surface level, or may be higher up the trunk. In spring, bleeding patches exude a dark but transparent liquid that turns a cloudy or opaque rusty-colour during summer and dribbles down the tree trunk. Under dry summer conditions, bleeding may cease and the exudate dries to leave a dark, brittle crust near the point of exit in the bark

After some months the centre of the bleeding bark patch may crack apart. Fruit bodies of wood-rotting fungi often appear on the surface of the dead bark, or protrude out of the bark cracks. Over several years the crown symptoms become visible, typically consisting of yellowing of foliage, premature leaf drop and eventually crown death. Sometimes part of the crown may fail to flush and the remaining foliage withers and dies later in the same year. In trees with chronic dieback caused by the disease, the leaves may also be smaller, and seem thinner and more flaccid than the foliage of healthy trees.

Treatment
Confirming the cause of symptoms of bleeding canker on horse chestnut is critical to any recommendations about effective control measures. There is no chemical treatment currently registered or approved for use in the UK to cure or arrest the development of bleeding canker caused by Pseudomonas syringae pv aesculi: 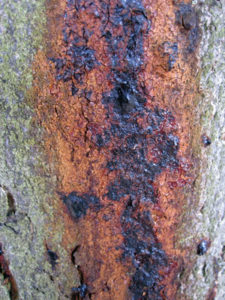 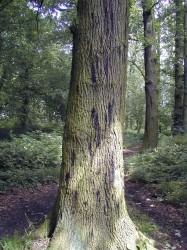 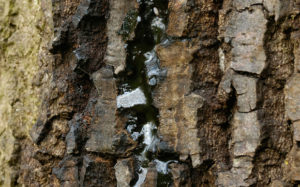